Welcome to part two of my look into Archero. This time we’ll focus on the long-term progression and how that contributes to the fun. If this is your first foray into this series, I recommend starting at part one, which you can check out HERE. Let’s dive in!

Chapters are sets of stages. The player must complete every stage in one run in order to complete the chapter and progress to the next one. Each chapter introduces new more difficult enemies with slight variations to the movement and attack patterns, and additional abilities which can be selected.

This infusion of content helps to keep the game feeling fresh. The developers drip feed the players new content to reinforce new challenges in each chapter. Once the player has mastered those challenges, items, and abilities, they move on to the next chapter. 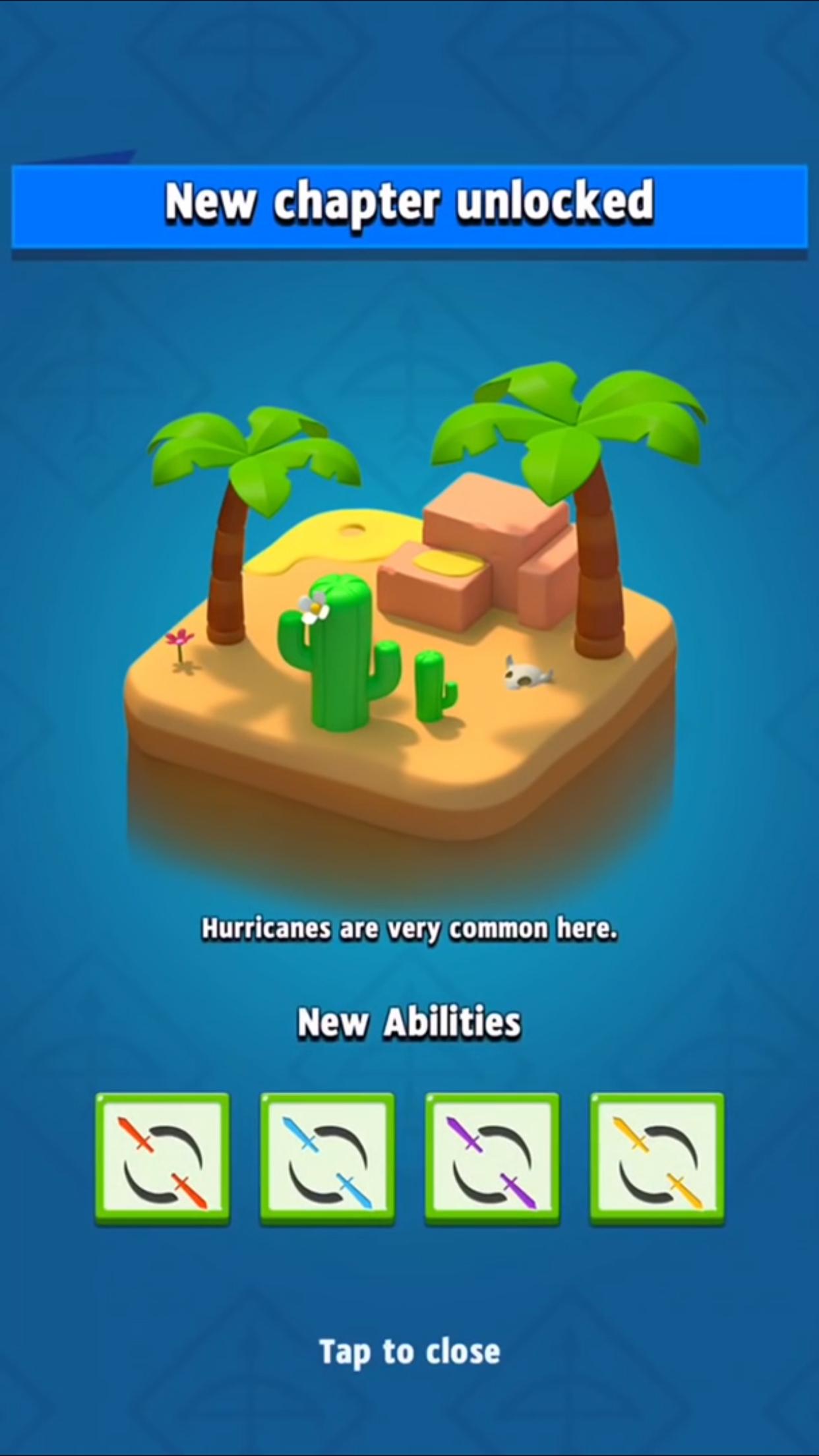 Players gain gold by killing enemies and doing spins in the wheel of fortune style minigame at the beginning of each run. As previously mentioned, the wheel of fortune style spinner increases in rewards based on which chapter the player is in. This is a useful catch up mechanic if the player is behind in leveling up their talents or wants to grind their level. Even if the first encounter is too difficult for them, they are guaranteed some progression just for trying.

The gold dropped from enemies is only received once the room is clear. This increases the risk in tougher chapters. If a player is barely surviving and there is gold everywhere but still plenty of enemies left it increases the tension making for a more stressful situation and enjoyable victory.

So why does gold matter? Let’s get into it in the next section.

Last time we discussed abilities, which are short term power ups that last until the player dies or completes a chapter. Talents are permanent stat upgrades. The player spends gold and receives a random talent upgrade. These are things like increasing max HP, general damage, attack speed, or so on.

This works great in the sense that every player’s character is different. Every player’s experience is a little bit different as well. But, as with all things completely random, it falls into the same pothole. What is the most frustrating thing about RNG? Getting the same useless item repeatedly. And while I would argue that none of these are particularly useless, some are clearly better than others. I think this would be fine in a casual game like a clicker or business management game. In tougher chapters though the difficulty skews away from casual at which point having some control over the character’s talent build would go a long way. When I make a mistake because I built my character wrong, that’s on me, and that’s not too frustrating because I can try to do something different. When it relies on RNG and there’s nothing I can do outside restarting my progress or grinding out of necessity rather than desire, it gets frustrating and pushes players away.

Equipment is like a permanent upgrade, but one the player has more control over. They receive equipment sometimes in game, more often from gacha boxes (a.k.a. loot crates). The player gets one gacha box for free,or when watching an ad, once a day and a better one once a week. These can also be purchased for gems, the premium virtual currency that can be bought with real money, at any time.

All equipment increases in level by the player leveling them up using their designated scrolls and gold. For example, a weapon will require X weapon scrolls and X gold. Scrolls are received commonly through playing the game.

As I mentioned before, there are various rarities for each of the weapons (common, great, rare, epic, perfect epic, and legendary). Though rarities in this sense would be closer to ascending an item to a higher form. All common items could one day become legendary items. This is achieved through fusing; the player can fuse three of the same items with the same rarity to create a higher rarity version of the original item.

Okay, that was a lot, but here’s what’s so brilliant about it. All that information is displayed in an easy to understand format across maybe two or three screens.

Left: We can see all the equipment laid out in an easy to understand fashion. Middle & right: The fuse equipment screen requires little text as they've messaged to the player well with images.

The player can discern all this information (except for gacha boxes and where scrolls come from) from spending maybe thirty seconds inside this menu. The scroll locations players will learn from seeing them drop while playing the game. The gacha box information they learn from the gacha screen when they receive a notification for a free box. No hand holding tutorial needed, just playing on their curiosity. This is some excellent UI and UX design. It’s easy to understand, it’s quick, and it doesn’t get in the way of players getting back to the game.

How does this further increase the fun?

How does all this fit together? It fits well into the games loop of fight > get rewards > improve. 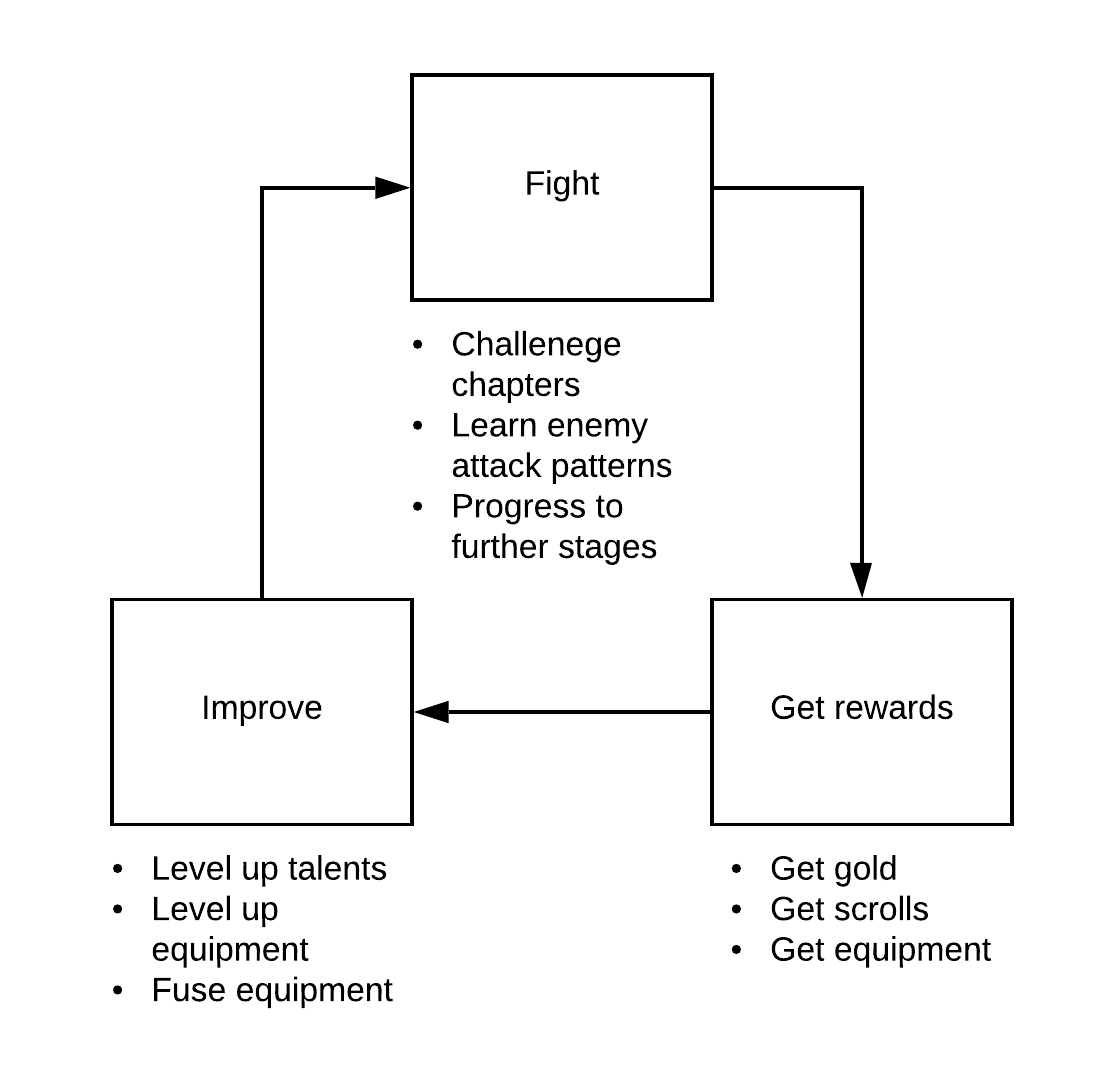 This loop resets itself every new chapter. When the player comes into a new chapter, they’re usually too weak to easily progress. They need to increase their talents and equipment levels to be able to better face the challenges of the chapter. While they are playing the game and getting the gold, items, and scrolls to improve themselves, they are practicing against enemies and learning the new attack patterns. Thus they are not only improving their stats but their skills at the same time. Upon completing the final boss and defeating the chapter, the whole cycle starts all over again in a new chapter. It’s fun in the long run just because of that simple loop executed so well.

The enjoyable moment to moment gameplay and a strong repeatable loop make for a very enjoyable experience for a long period of time. But how does this app make money? We’ve talked a bit about it in these last two posts and we’ll finish the series out answering that question next time.

Part three is up! Check it out HERE