Welcome to part three of my look into Archero! This time we’ll focus on the monetization aspect of the game and how it doesn’t intrude on the fun. If this is your first foray into this series, I recommend starting at part one which focuses on the gameplay, which you can check out HERE. Let’s dive in!

Where money comes from

In Archero there is soft currency called gold and hard (premium) currency referred to as gems.

Gems are received via:

·       The wheel of fortune minigame, which sometimes gives them a chance to receive gems for watching an ad

Gold is received via:

Gold is primarily used for standard progression and upgrades. Gems are used to speed up progression. As we’ve already covered everything gold can buy in the previous post, we’ll be focusing on gems this time around.

Players have standard max of twenty energy. Attempting a run costs five energy. It takes twelve minutes to recharge one energy. When a player completes five new stages, they are given an additional five energy. They can also buy twenty energy for one hundred gems ($1.25) or watch an ad to recharge five energy up to four times a day. 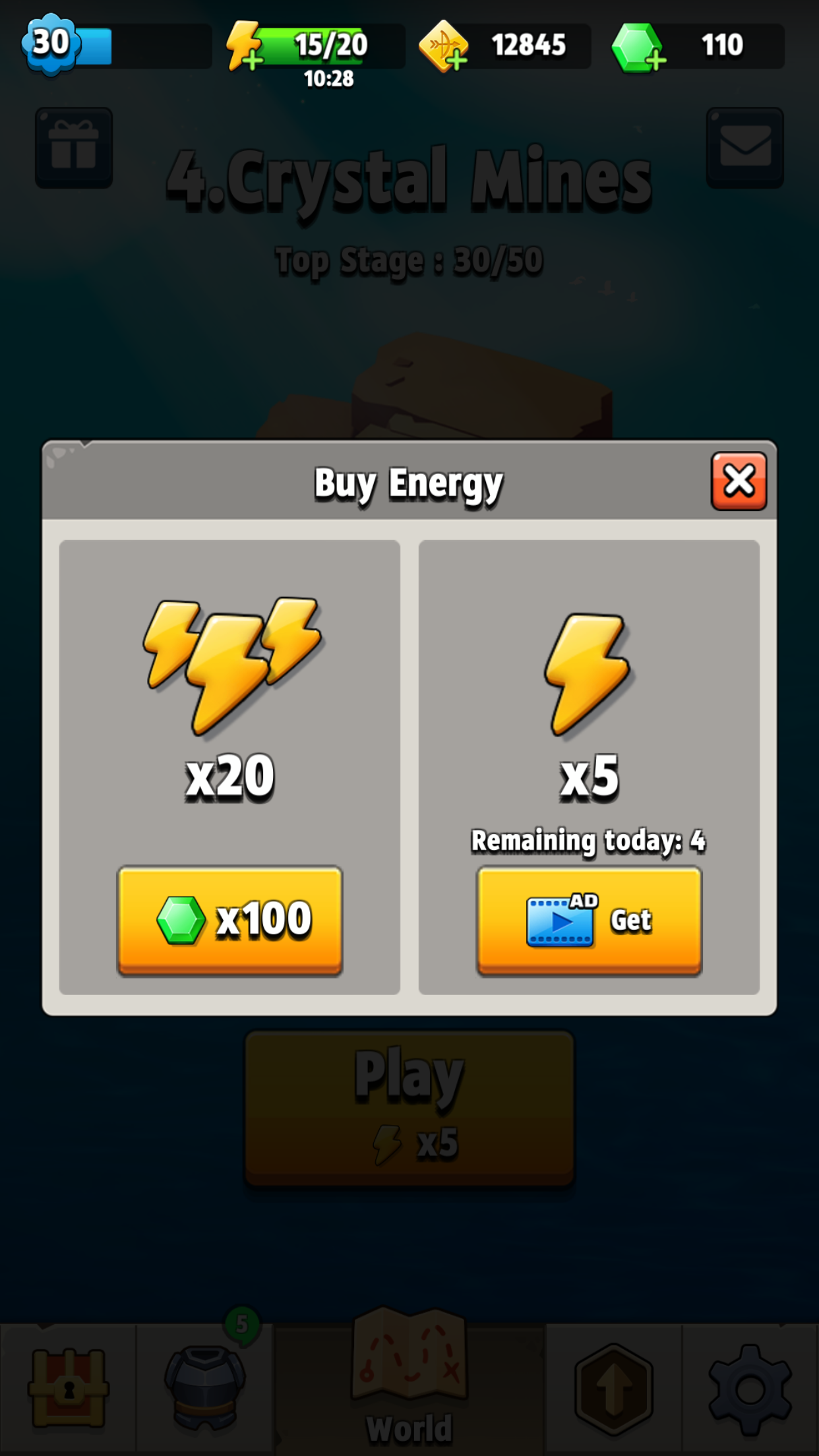 You can imagine how this plays out in the beginning of the game. Players have over twenty energy easily and can play nonstop for quite a while. By the time the player will have to wait for energy to recharge, they’re well into the game and have begun investing themselves in it. They’re familiar with all the aspects of the game and are enjoying themselves so they don’t want to stop. This motivates them to watch the ads, after which if they’re still enjoying themselves it becomes easy to justify spending one hundred gems on another twenty energy.

The first time a player dies in a run they are offered a chance to revive. This costs 30 gems and the player only has five seconds to decide. 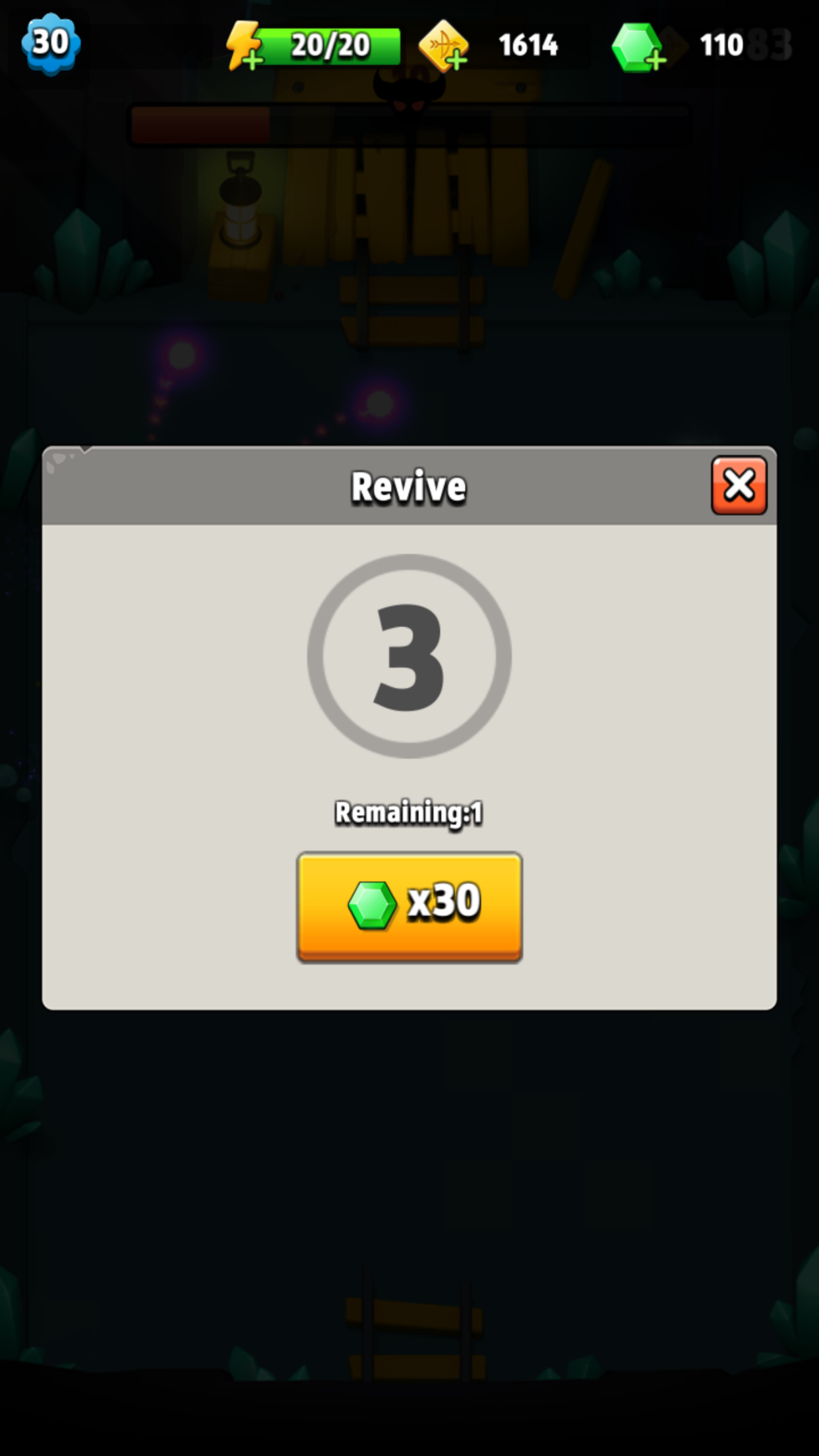 This mechanic adds to the fun because it allows the players one more shot if they have an excellent set of abilities. Additionally, because they only have five seconds to decide, it keeps the game moving and keeps them in a heightened state. They don’t fall out of the flow of the game. In fact, wanting to stay in the game could lead to them impulsively spending money when they normally would not.

This mechanic works in this instance because of the amount of time and work it takes for the player to get through the chapter in one run. Players are more likely to want to throw money at this if they’re near the completion of a run.

The mysterious vendor appears from time to time after the completion of a stage. His inventory is always different scrolls. The player can purchase these scrolls for gems. 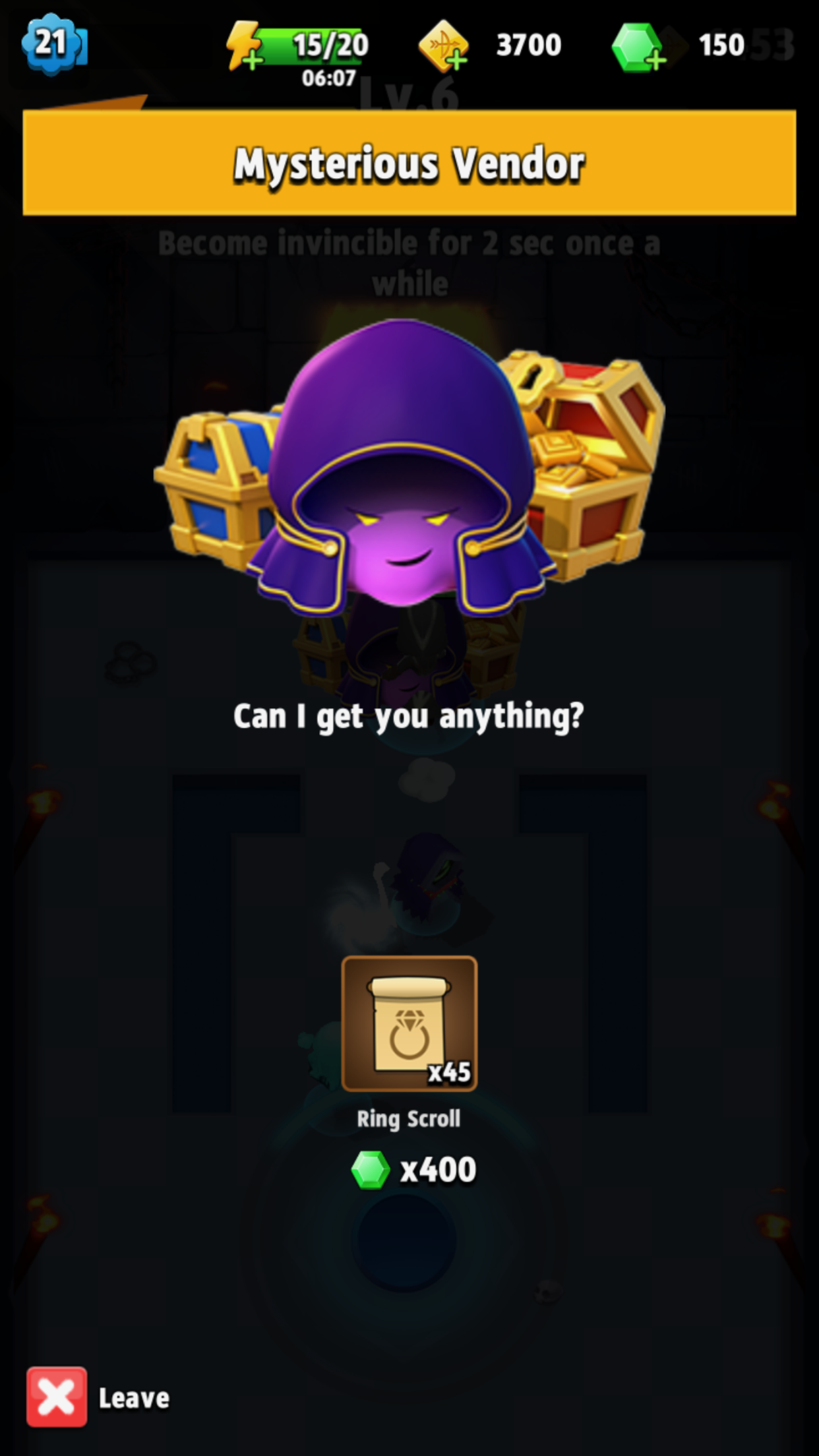 This falls under the convenience category of monetization. He’s targeted at late game players because he sells scrolls in bulk for a lot of gems. Late game players need a ton of scrolls for improving high level equipment. He’s there so if the player is tired of grinding for a scroll, which he happens to have in stock, they can speed up the progression and the grind by paying him. He’s particularly well thought out because players don’t “need” to purchase his wares but getting what the player wants that quickly is awfully tempting. And if they don’t buy it at that moment, they have no idea when he’ll return and what his stock will be.

These are the best ways to get equipment. Because the player is given gems for defeating every five new stages and the chance at receiving gems for watching adds during normal playthroughs, it fits nicely into the loop of the game. Fight > get some gems (rewards)> save up enough and buy a box (improve)> repeat. A player only must purchase boxes with real world money when they want to speed up their progression. They monetize impatience.

Something I don’t want to discount is the low number of items within the boxes and that the boxes go up to maybe halfway to max rarity. Because the fusing system requires multiples of higher-level items at equal rarity, players will have to get even more items from the boxes, resulting in more boxes needed to be purchased to progress. If there were a huge number of items, I think the fusing system wouldn’t work and it’d be too tedious. But there are only four weapons, four armors, four rings, and four spirits, that’s it. Sixteen items are a tiny amount for a gacha game and yet it works so well because it fits with the progression systems requiring multiples.

Every chapter has an accompanying bundle. They usually come with some gems and a mix of something useful to the player in that part of the game. For example, the beginner pack comes with three hundred gems, ten thousand gold, and five free revives. The players can’t buy higher chapter packs until they purchase the previous chapter ones. 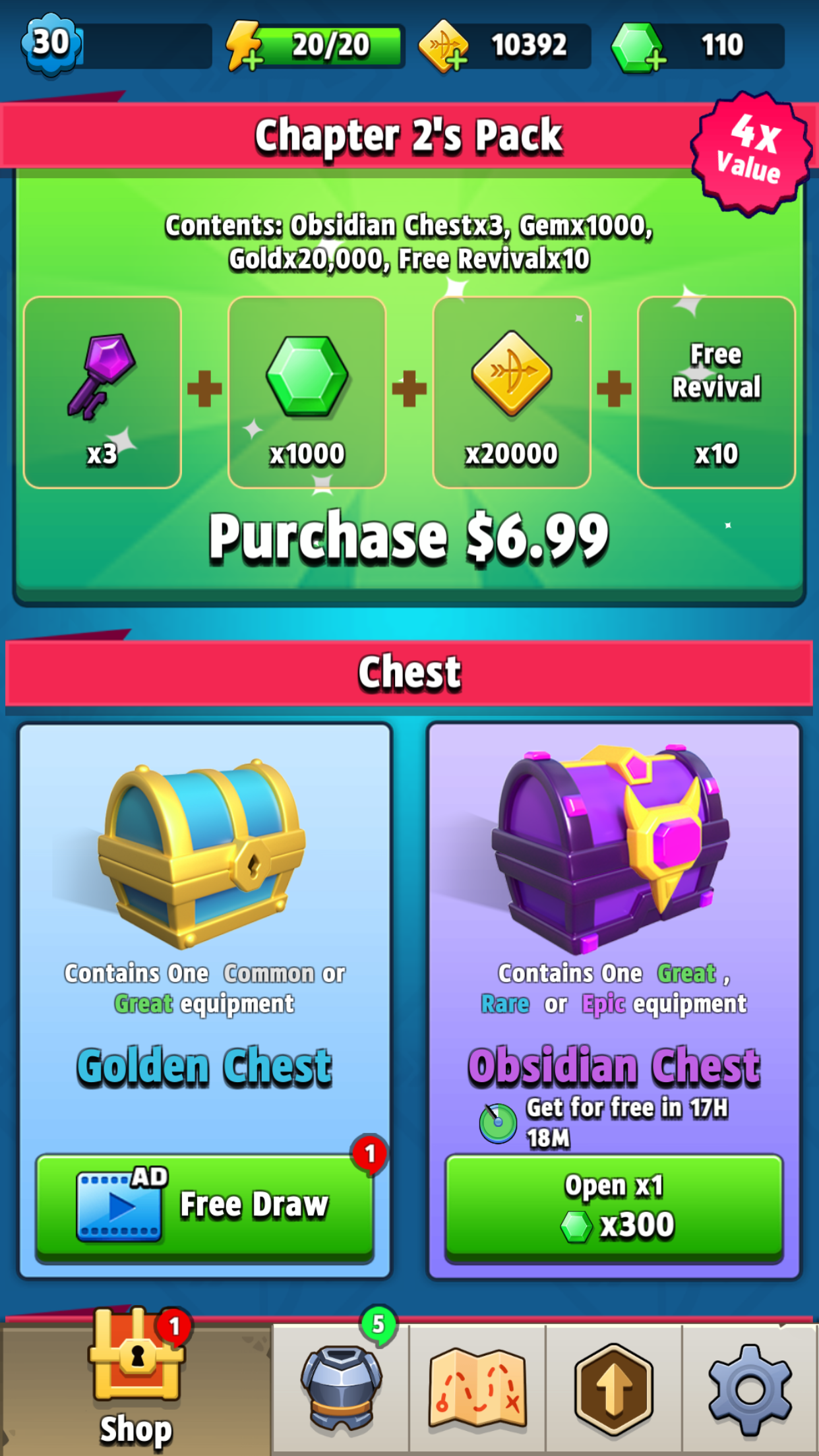 That last part is what’s most important because it helps condition the player to spending money on the game in progressively larger values. By holding the more expensive bundles in hiding from the player until they purchase the previous ones, they don’t scare off potential sales with the expensive prices. Then when they do appear, they feel more special. The hardest thing for a free to play game is to get that first purchase. If they can convince the player to purchase the first bundle at $1.99, it makes it so much easier to convince them to buy the second at $6.99 and the rest at $10 each. And if the player buys them with each chapter it becomes a habit, at which point they can kiss their wallet goodbye.

By looking at all the ways Archero monetizes, it’s evident it really excels by tempting the player to spend their real money while never demanding it. It’s like they’re a devil on the player’s shoulder, “Don’t you just want to play a little bit longer?”, “Don’t you want to improve just a little bit faster?”, or even “Just watch this ad and you’ll get something cool!” They are constantly tempting the player, but never forcing them to spend money or watch an ad. It’s always the player’s choice. Archero is able to focus on gameplay because of this, ultimately resulting in increased user engagement, retention, and a happier community.

If you’ve come along with me on this journey through the pieces that make up Archero, I thank you. It has taken me a bit of time to put this together and even longer to research it. I hope I got you thinking about how the different pieces of this game are put together and why they make this full package an enjoyable experience.