Hey everyone! Today we’re going to start talking about battle passes! Almost every successful live game has one, and we’re going to break down the most common types of battle passes seen today. We’ll discuss how they work, and the pros and cons in each. In this series, we’ll specifically take a look at the battle passes found in Fortnite, Call of Duty: Warzone, Halo Infinite, and Destiny 2. After reading this post, you’ll be equipped with the logic and knowledge to design your own!

In a battle pass, players do actions in-game, earn XP for those actions, and progress along the track. Each level up earns them some rewards. The rewards typically consist of timed XP boosts, skins, resources, exotic items, and so on. Really, anything that can be awarded in the game can be awarded through the battle pass. 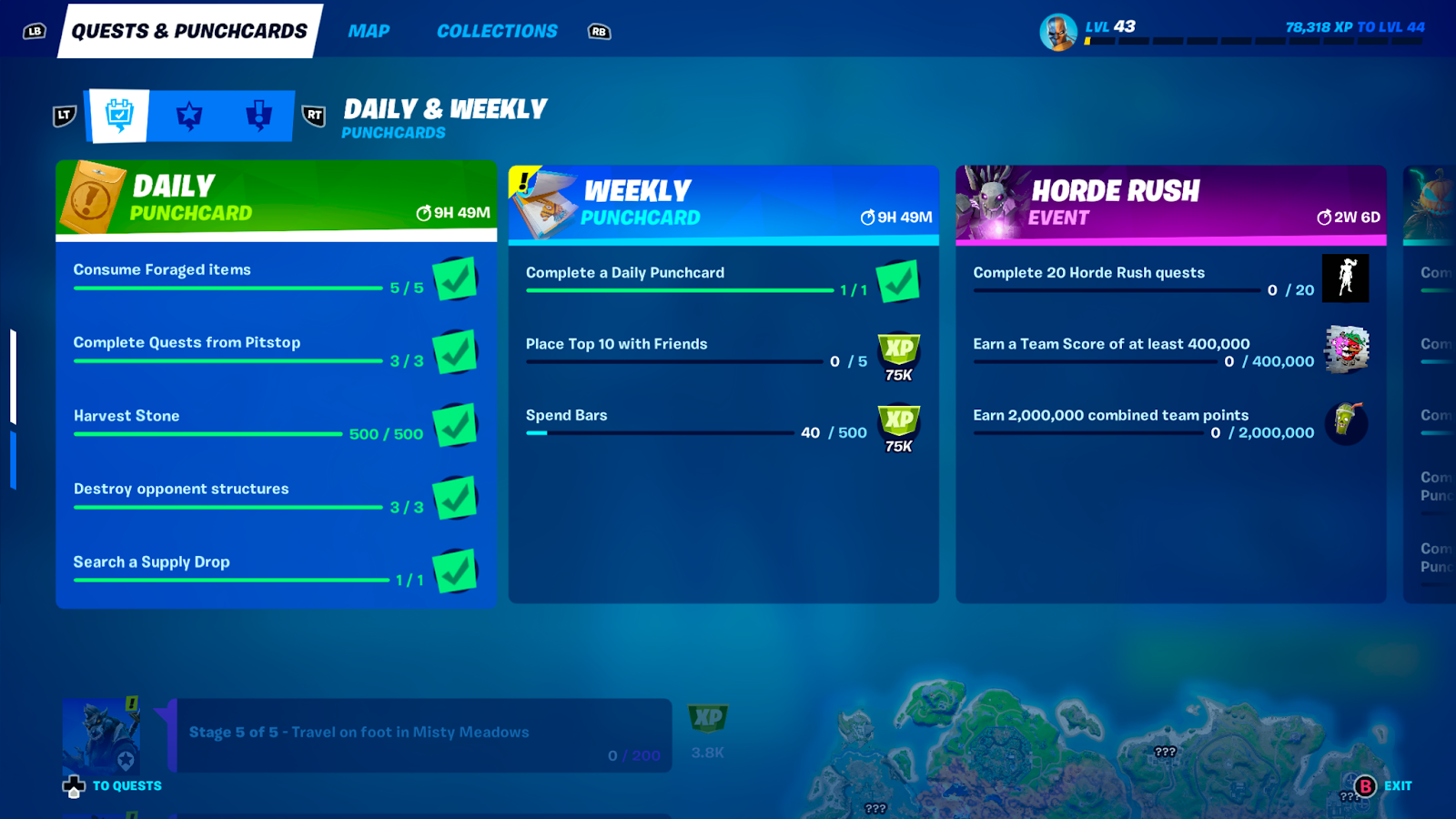 To further reinforce the loop within the player’s session, daily missions are added that contribute to the battle pass. Players are given a series of missions every day, which they can complete for additional progress along their battle pass. This is built on top of the XP they would be receiving for playing the game. This helps to not only create a variety of objects every day for players, but it typically gives them a little bump in their battle pass progress. When balanced correctly, this guarantees that they advance at least one battle pass level per day if the user completes all the missions. As you can see, there is a top track and a bottom track. The top track is the free battle pass track for users who are not spending money. The bottom track is the paid battle pass track. This way, every time a non-paying user goes to collect a reward, they are forced to look at the rewards they could be receiving if they were to spend money. This entices non-paying users to buy the premium pass rather than miss out on all the things they have ‘unlocked’.

A newer version of this same style can be seen in Halo Infinite. The newer version combines both tracks into one track and just labels the free items. 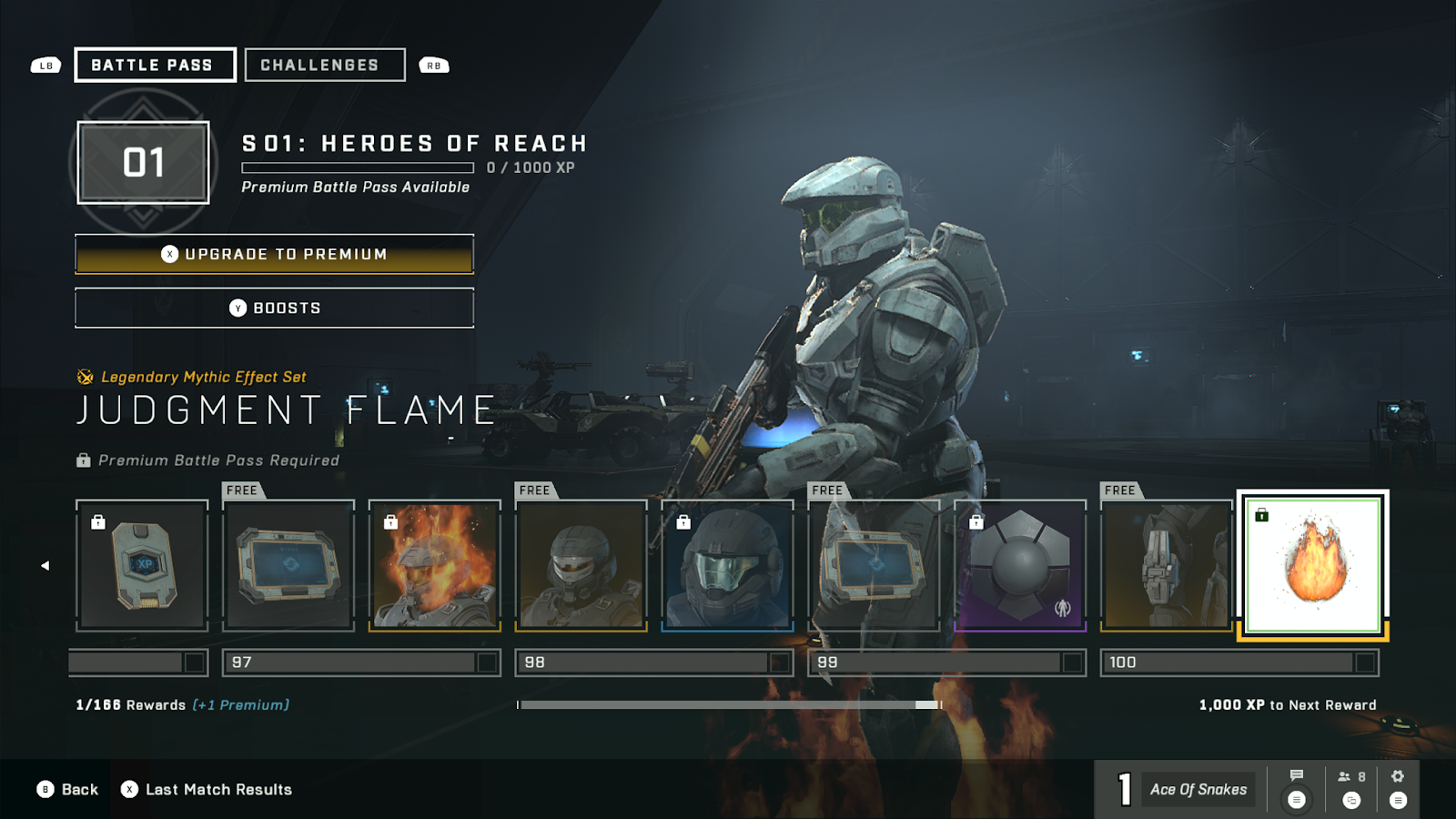 An even newer iteration has been seen in Call of Duty: Warzone. In their version, they’ve incorporated “Clan Tier” rewards. These rewards can only be claimed if you are in a clan. This is a clever idea in concept because it forces users to join clans. If they join a clan, they’re more likely to be retained and continue playing the game. And then… there’s Fortnite. 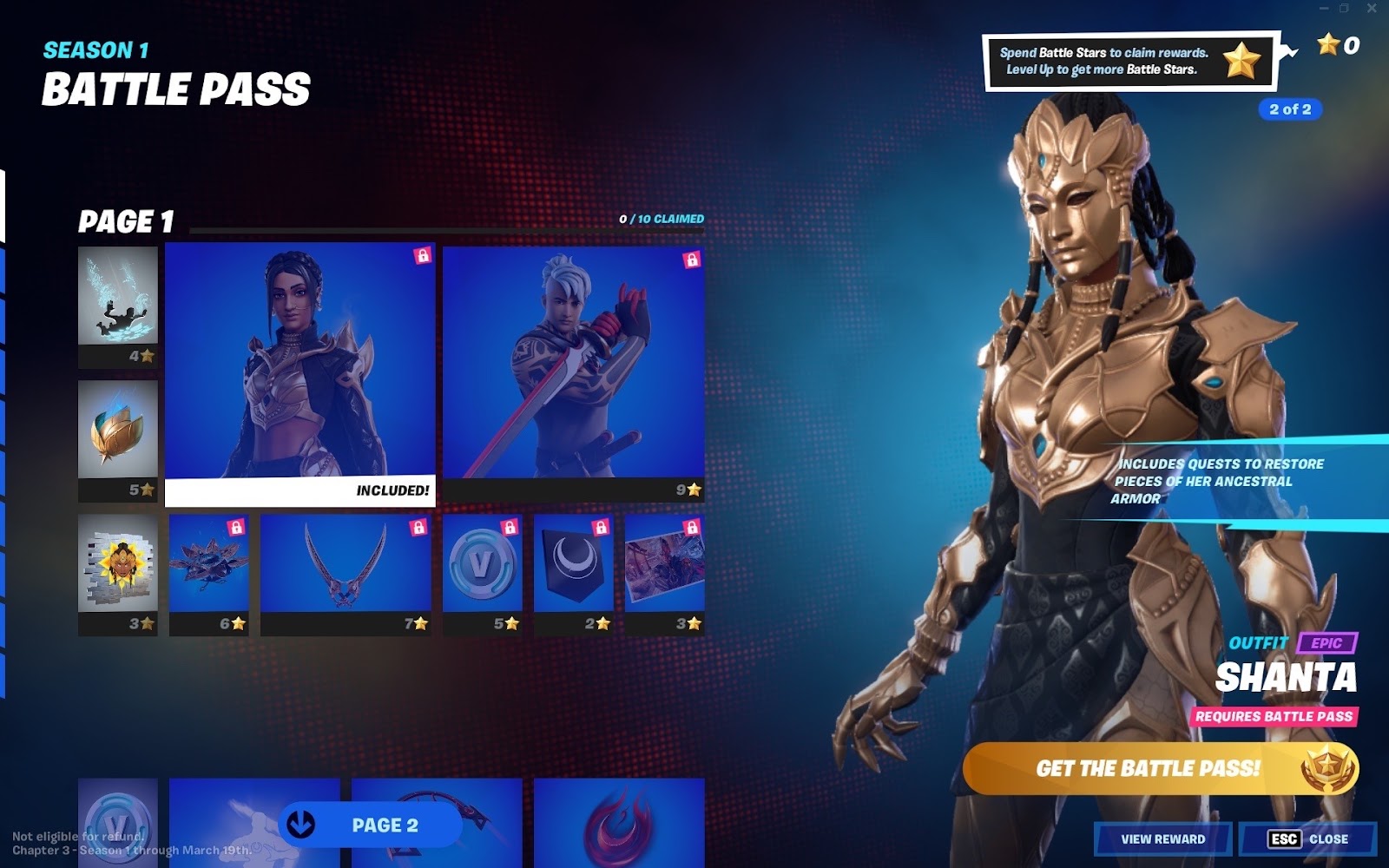 Fortnite marches to the beat of its own drum and embraces some interesting and very different ideas. Instead of using a direct track, Fortnite uses a page system. What I mean by this is there are ten pages of rewards in the main battle pass. Each page has a requirement to unlock it. Either the player needs to reach a specific level, or they need to unlock a specific number of rewards. They unlock rewards by spending various amounts of stars. Every time they level up, they receive five stars. They level up by gaining XP for completing games and punch cards (Daily Missions). Like the previous iterations of battle passes, there is a free track for the users, which in this case is the leftmost side of the rewards. Call of Duty: Warzone, or CoD, does have a slight leg up on Fortnite with the addition of Clan Tier rewards, but I’m sure we’ll see that become more common in the future.

The Fortnite battle pass is particularly interesting because it gives the players some choice. While the choices erode over time due to the requirements to unlock the next pages requiring a higher percentage of available items unlocked, at an early stage players can decide which reward to unlock based on what they feel is most valuable to them. So if there is a bundle they want to buy from the store but they’re a hundred V-Bucks away, they can choose to unlock the hundred V-Bucks on this page instead of the other rewards.

On later pages we start to see ‘Prerequisites’ and ‘Base Item’ requirements: 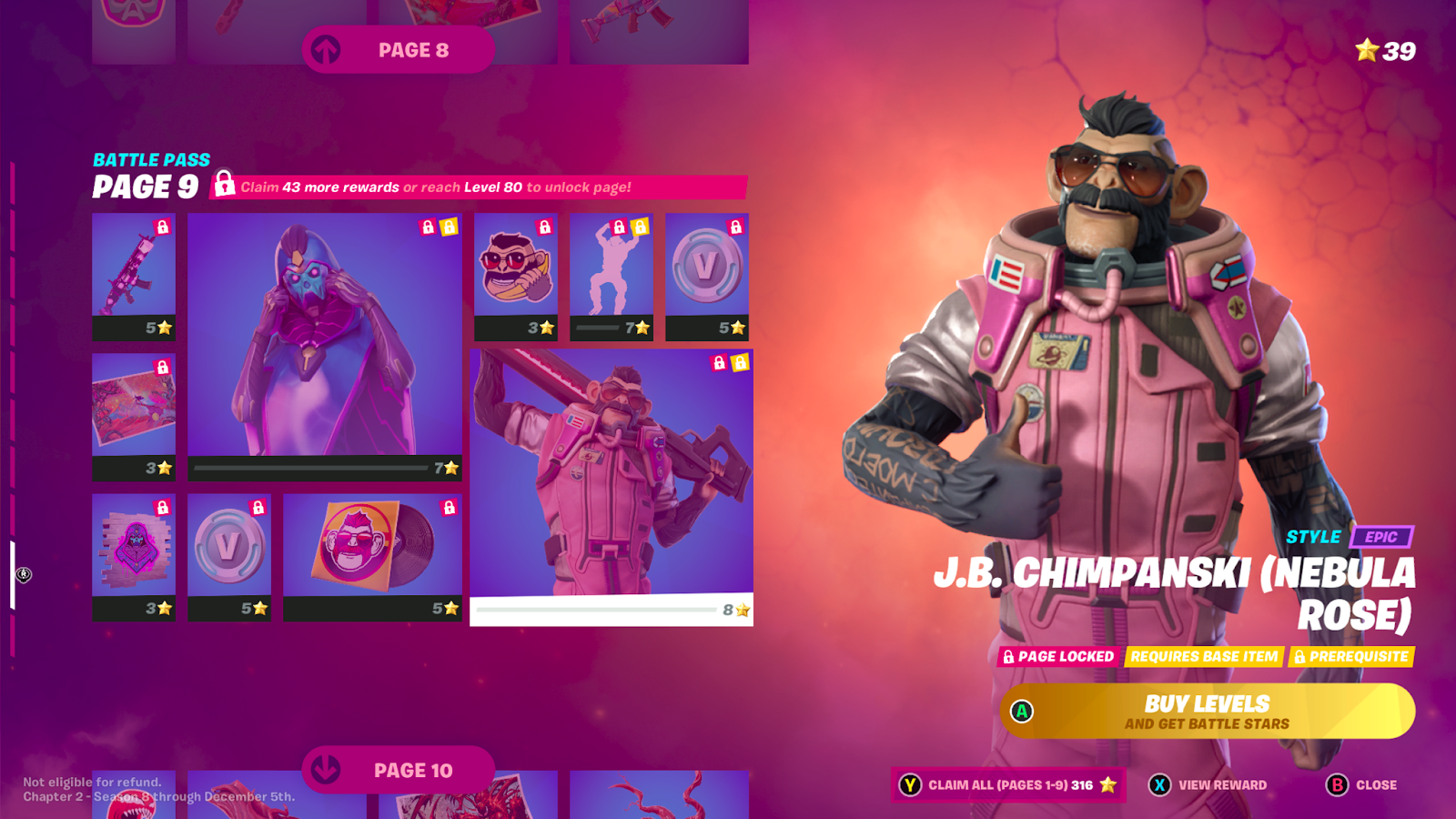 Prerequisites mean the player needs to unlock everything else on the page first before they can unlock this item. Requiring the base item means the player needs to unlock the generic version of this skin before they can unlock this one. Frequently, the skin they need is on a different page. Fortnite uses these two concepts to create chain reward requirements for some of the more interesting items. For example, if a player wants to unlock the J.B. Chimpanski (Nebula Rose Skin), they’ll need to unlock everything else on this page first, as well as the J.B. Chimpanski generic skin. You’ll notice though on this page there is another skin. This skin likely requires a generic version to be unlocked as well. Both of the generic skins are on different pages and have the Prerequisite requirement. This means players who have not completed those pages first will need to go back and collect all the items from those pages to unlock the generic skins so they can unlock the new skins. I like this because it’s subtle and allows users to create their own goals for chasing rewards. The player becomes a little more invested in trying to unlock specific items rather than just chugging along a straight track.

First off, it gives me a chuckle that every one of these styles, outside of the addition of the Clan Tier, have been a part of Fortnite in the past. So you can probably figure out which season of Fortnite the developers played the most of based on what battle pass they used in their game.

Jokes aside, personally I like the Destiny 2 or Fortnite’s version since it’s clearer to the player at a quick glance as to which rewards they are receiving and which they are missing out on. The blank spaces in the Destiny 2 free track clearly show the user is not receiving this reward, but could be receiving the paid reward if they just purchase the battle pass. They also see more rewards on screen that they are missing out on rather than Halo’s battle pass. In Fortnite, you clearly can see the rewards you’re missing out on next to the free track as well, plus it creates some early choice for paying users. Additionally, users can create their own goals and chase the specific items they want, further motivating them. The Halo and CoD passes are cleaner in the sense that the second track isn’t taking up precious UI space. There is more space on the top of the screen to really show off the effect or item the player has highlighted. But it is slightly harder to read as there is an item in every slot and players need to look for the “Free” tag on the item to know which ones they are eligible for. I imagine this would cause a little bit of confusion initially as to why the users are not receiving the reward because it’s slightly less clear. Though, I do love CoD’s idea of encouraging joining clans via the battle pass.

The Good vs the Bad:

The strongest benefits to the track style is that there are a ton of rewards. Well over a hundred rewards in a track means the player earns something with every level completed, leading them to feel happy about their progression. The free track is also fantastic at getting non-spending users to look at the battle pass and promote spending on the battle pass as they don’t want to miss out on the cool things they can see. It’s not too difficult for designers to balance it and put this together. Because of the linear nature of the rewards, designers always know B reward will be received before C reward. Or that C reward will be received for X time of engagement. Like I mentioned before, CoD’s Clan Tier idea encourages players to join clans, thus promoting retention within their game as they form bonds with other players. Fortnite specifically gives players some semblance of user choice as to when they want their rewards. It also promotes players creating their own goals and chasing specific items, rather than just plugging along a track.

There are a few drawbacks though, which are more easily seen when compared to something like Fortnite’s battle pass. In the track based battle pass, there are no options as to when a user wants to unlock a specific item. This removes user choice and control. While this can be considered a good thing, as it streamlines the process, it’s less exciting than getting to specifically choose the reward that they want, when they want it. Additionally, the “Clan Tier” in CoD isn’t explained well. A quick google search reveals a frustrated player base with more questions than answers regarding it. It seems there are a slew of players who are progressing along the pass, but not unlocking the item and thus getting frustrated with the game. On the flip side, Fortnite’s page-based battle pass doesn’t focus players’ goals as well as the straight track does. This can lead to some players suffering from analysis paralysis and not engaging because it’s just too much information to process. There’s also the issue that  Fortnite players won't be able to unlock rewards every single level up. Occasionally, players will need to grind a second level to gain enough stars, their version of XP for their battle pass, to unlock the reward needed to progress to the next page. This is not a great feeling, but, for players who go through the grind, the items are more valuable to them because they put in extra effort to get them.

Ultimately, you just need to be aware of the pros and cons of each and determine which is best for your game.

That’s it for this time. If there is some demand for it, I’ll break down the value of each of the passes and do a post on how designers likely select and value the rewards, what the true value of the battle passes are, and add some of my insight. Hope everyone is having an excellent year so far, and I’ll see you next time.

If you enjoy posts like this one, you can check out more like it on my portfolio/design blog