The following are transcripts of my Uncharted 2 video series (parts 4-5 out of 5) from my channel Farlands. The first compilation can be accessed by following this link.

So in the previous videos of the series, we have discussed what is pacing, and how Uncharted 2 handles it. Now, we are going to talk about some techniques the game uses to its advantage. The first one is In Medias Res.

It is a narrative technique that starts you from the middle of the story before getting to the beginning. The goal is to instantly engage players, and only then expand on what is happening and why. You need to intrigue, but also be careful to not confuse instead.

In games when using this technique you also have to keep in mind tutorials and onboarding. You’re not just putting the player into the middle of the story, you also instantly show them what the gameplay is all about in an exciting but not too overbearing manner. Uncharted 2 perfectly handles everything in its In Medias Res beginning. Just look at this first cutscene.

So many things are happening. We are in a train. Why? We are wounded. What happened? And then it turns out that the wagon is hanging off a freaking mountain. How the hell did we get into this? In less than a minute there’s so many questions that players already want answers to.

Then we get a platforming tutorial where players are actually not in any real danger, but they feel like they are due to the narrative set-up. We then get some more navigation and shooting tutorials, and bits and pieces about what happened. The chapter ends after we find the MacGuffin of the game - a mysterious ritual dagger, and we switch to the early parts of the story to continue chronologically from there.

I mean, holy shit, how much more effective can you be? Now, it’s important to keep in mind that just starting at such a moment is not enough. You have to put breadcrumbs for the players to follow. Gasp, we found the dagger. Gasp, we travel to Nepal, that’s right next to the Himalayas that are in constant view! Gasp, our treasure is in the Himalayas, that’s why we will be in the mountains. Gasp, he mentioned a train, that must be the same one.

And then after actually getting to this train, we experience the single longest action sequence of the entire game, delaying the reveal of what has actually happened as much as possible. And this is why the In Medias Res of Uncharted 2 is so effective. Not just because it starts with a bang, but also because it keeps teasing you with approaching closer and closer to this moment, to answer all your questions. And by then you’re hooked, you’re invested and you want to see how this story ends and how the characters you learned to love will get out of this situation. This is how you get a great In Medias Res beginning.

We continue our exploration of the techniques Uncharted 2 uses to help create the wonderful pacing that it has. This time we will talk about contrast.

Let’s take a look at our chart from the second video. In the middle section we have pretty much non-stop action that keeps getting more and more intense, culminating in the famous train ride levels. After them, though, we pretty rapidly drop down to the calmest chapter of the entire game. You can’t even jump there, you don’t fight, you just walk around, greet people, play with children and pet yaks. 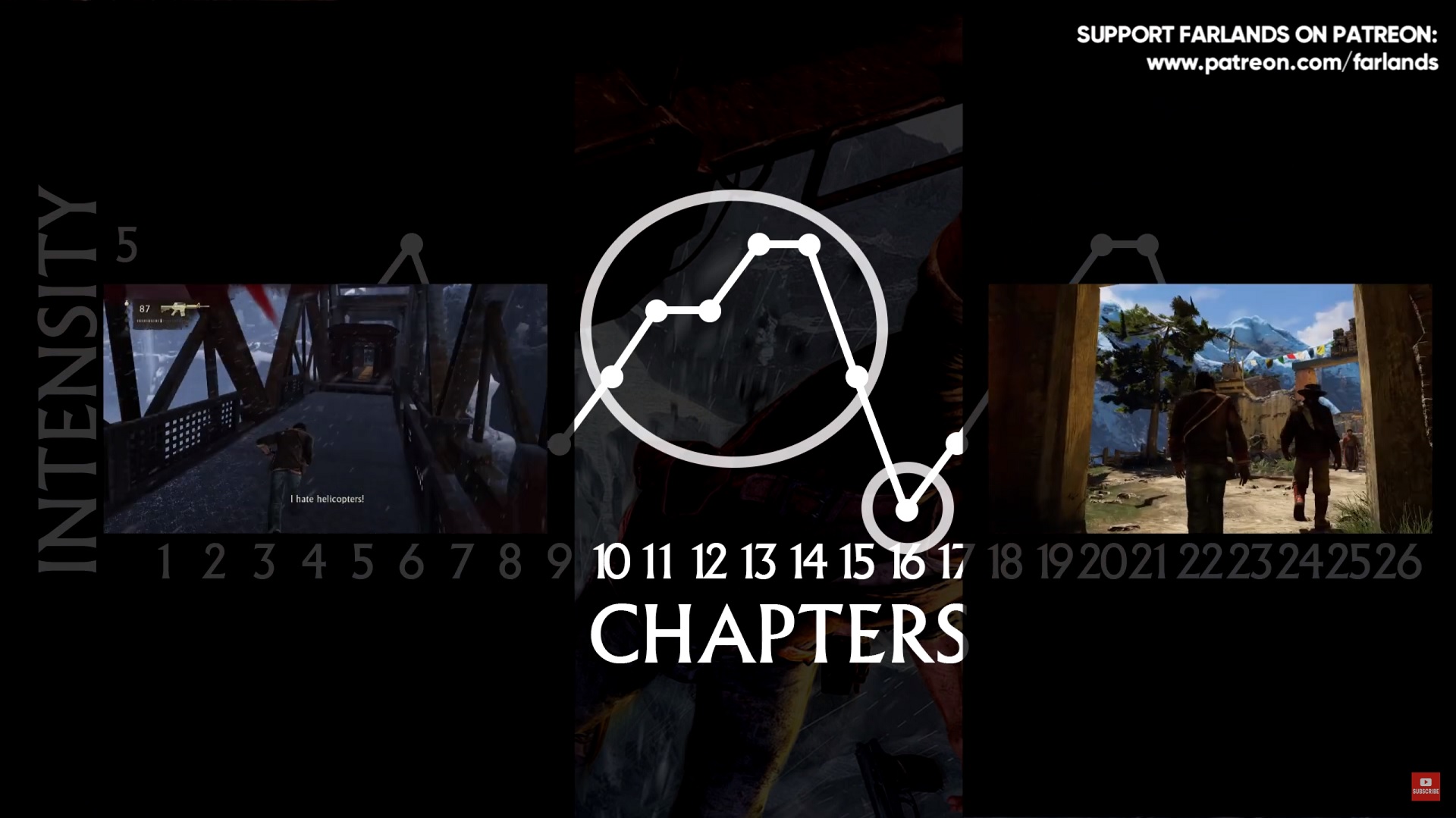 This is contrast, and it is very important for player engagement. People get used to things, that’s just the way we are. And so they wouldn’t, you switch things up. Keep in mind though that contrast is not just about variety, which we have discussed in one of previous videos. Contrast is about changing things in the opposite direction. This is why a whole sequence of ever increasing action is followed up by a chapter of absolutely no action at all.

And that is the most efficient way to achieve contrast: by drastically changing intensity and the predominant type of actions. That being said, this is not the only way. You can also achieve contrast by changing the approach to the actions. For example, in this section closer to the end, you predominantly do only combat. 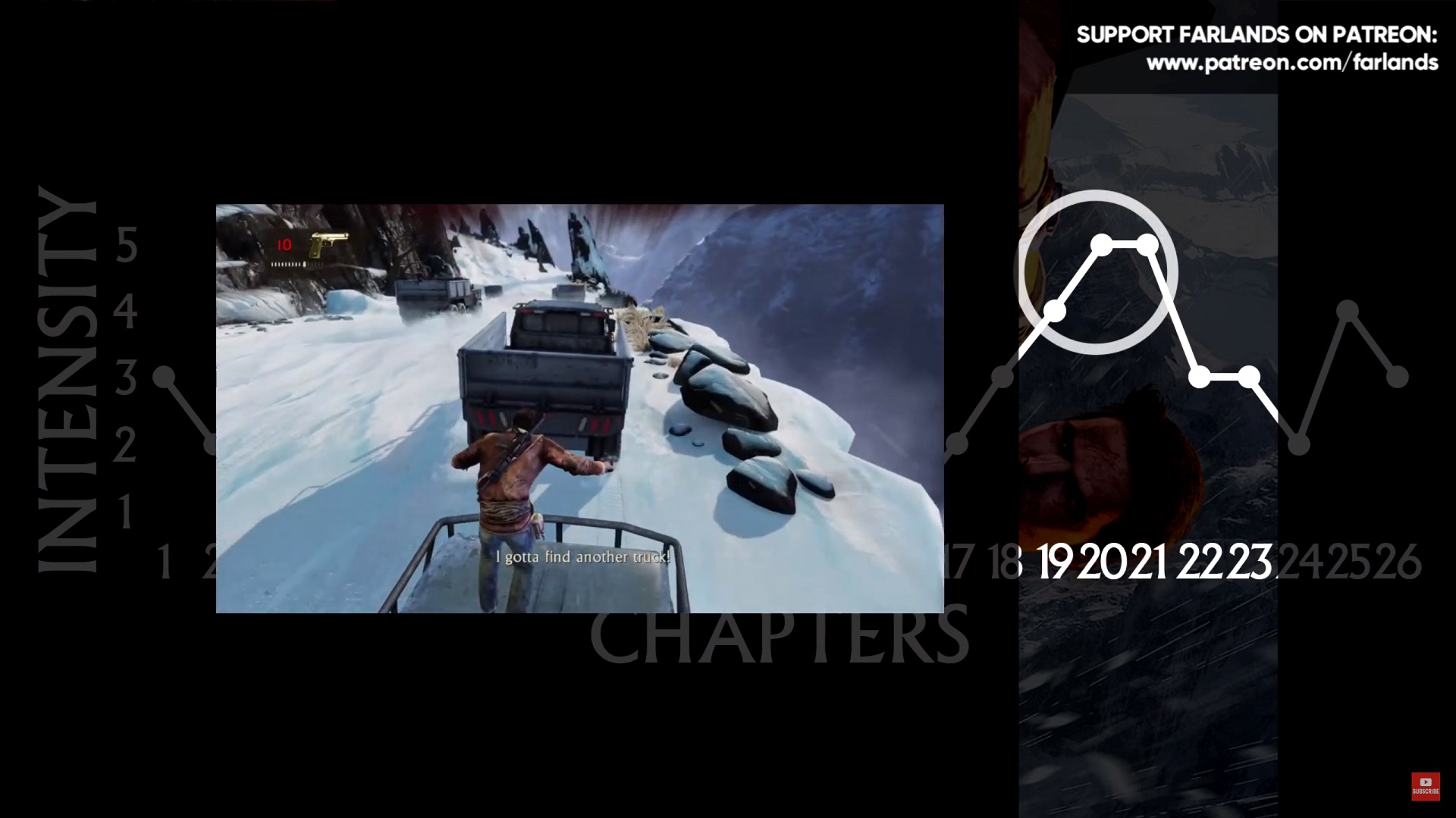 However, in these 3 chapters, you are not in control of what’s happening and always have to scramble and adapt to survive. But in the following two missions, most of the time you keep control of the situation and how the engagement will go. That said, while this type of contrast is enough to keep players engaged, it might not necessarily be as memorable as the type discussed before.

One last important note about contrast is that you can’t do it too often. If you do, players just won’t be able to get a proper taste of any kind of gameplay. So, you first keep players engaged by varying things up within a certain context, and then continue engaging them by switching the context through contrast, and repeat after a certain time.

With this, we conclude our exploration of Uncharted 2’s pacing, and what makes it so good. I hope you have enjoyed the series as much as I have enjoyed making it. I’m sure there are many details that these videos might not necessarily cover, so if you want, let’s discuss them in the comment section.

A special thank you goes to my patrons for supporting my channel, that really means a lot. If you’d like, feel free to support my campaign at patreon.com/farlands. And regardless, be sure to like and subscribe to keep track of when future content appears on the channel. Thank you very much!