This is the yearly look at what is the most important game event in Europe, and the coverage it has generated around its latest edition.

While the event has always been in August, this is the first time that it’s been staged during the same week of August as the previous year. The event was also on the same days of the week as last year, a change from the previous formula (it now happens from Tuesday to Saturday instead of Wednesday to Sunday).

There were no major press conferences at gamescom this year from any console manufacturers, or any of the main publishers. There was an official press conference/opening ceremony, though. It was not incredibly impressive.

Before getting into the media coverage numbers, I think it is important to put everything in the context of the gamescom attendance numbers: 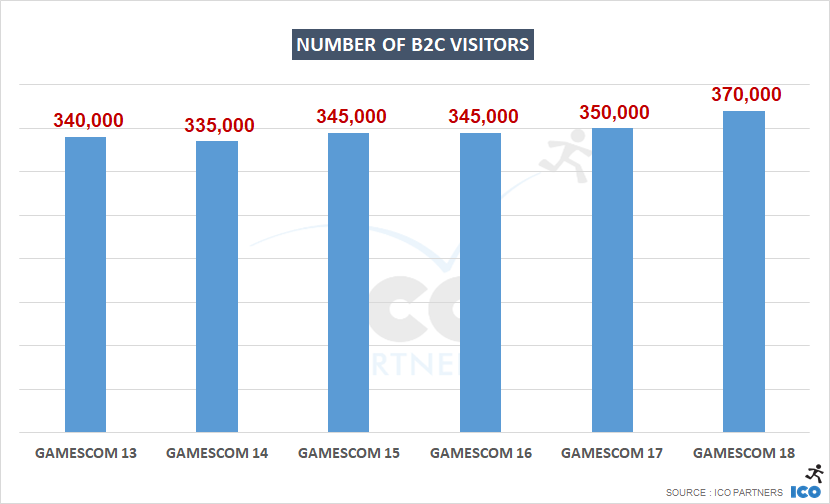 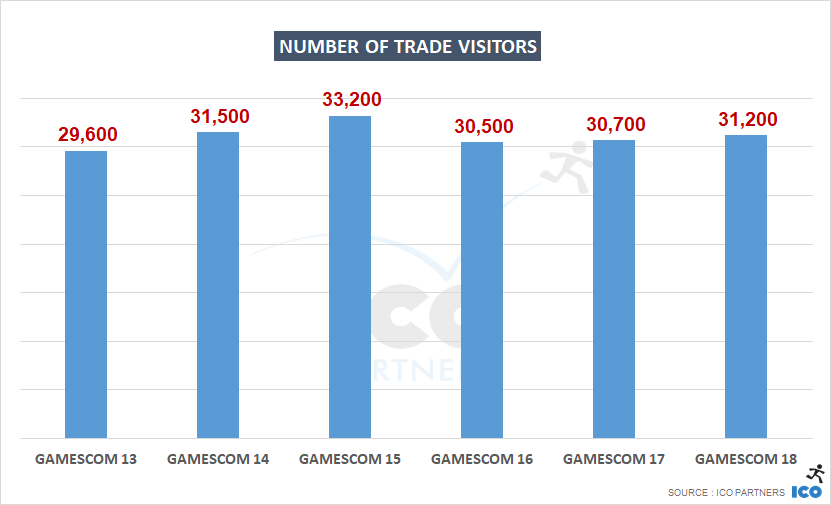 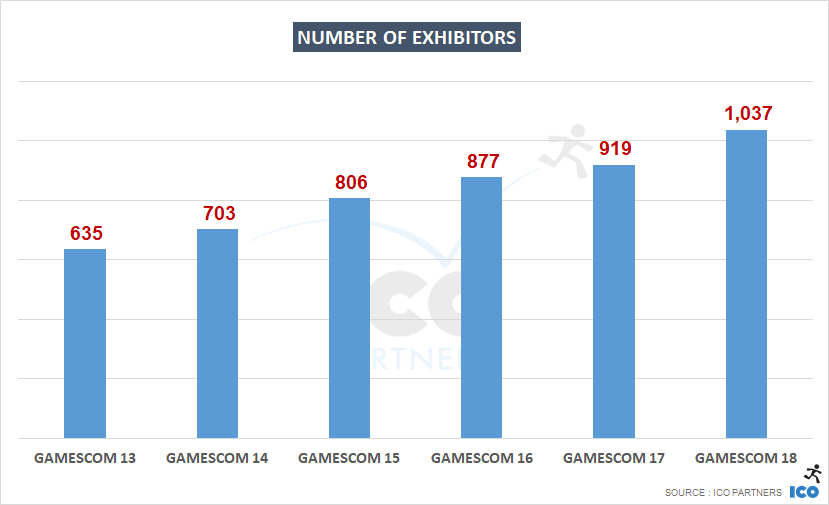 This is the first time in a while that gamescom has seen significant growth in its consumer attendance. This is impressive, because as an event it doesn’t obviously have much room to grow. The Kolnmesse is a huge exhibition complex, and almost all of its halls are used for gamescom; and while they are not necessarily full, the spaces that are a bit empty are very much welcomed by attendees, considering how packed it can be everywhere else.

This is also the first time that gamescom has passed the 1,000 exhibitors mark.

gamescom in the media

Even more so than last year, there were no very strong media beat coming out of gamescom. There were games that were first shown there, and they naturally created a degree of attention, but in terms of volume of media coverage, there was not much to drive a significant volume of articles. But even then, the results are drastic: 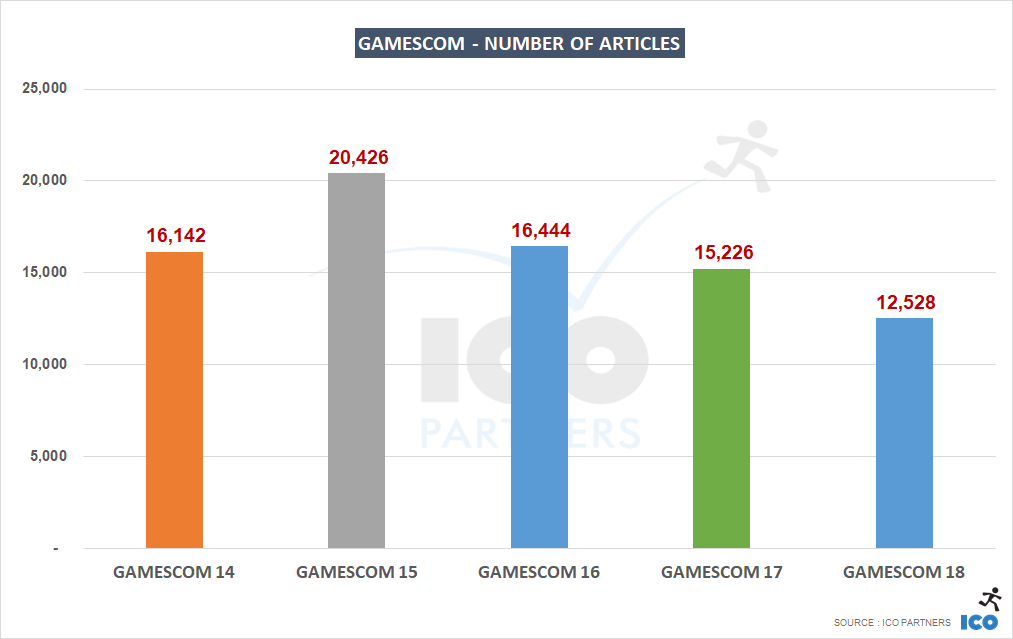 That’s 18% fewer articles than the previous year, and the lowest total since we started tracking this data.

Arguably, the best year, 2015, was the first one that Sony skipped for its conference, but Microsoft had a strong line-up that year. 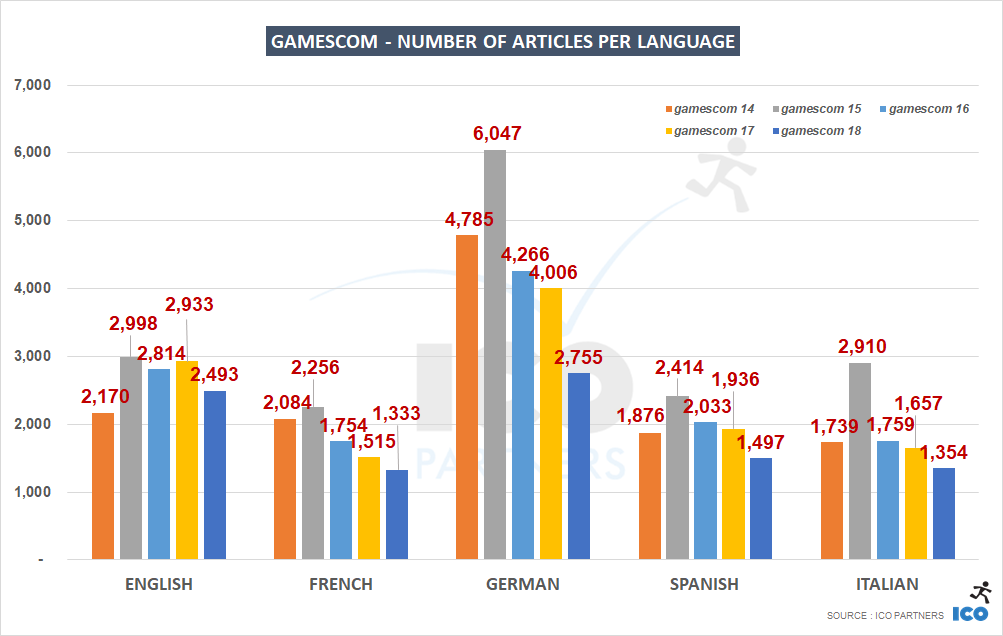 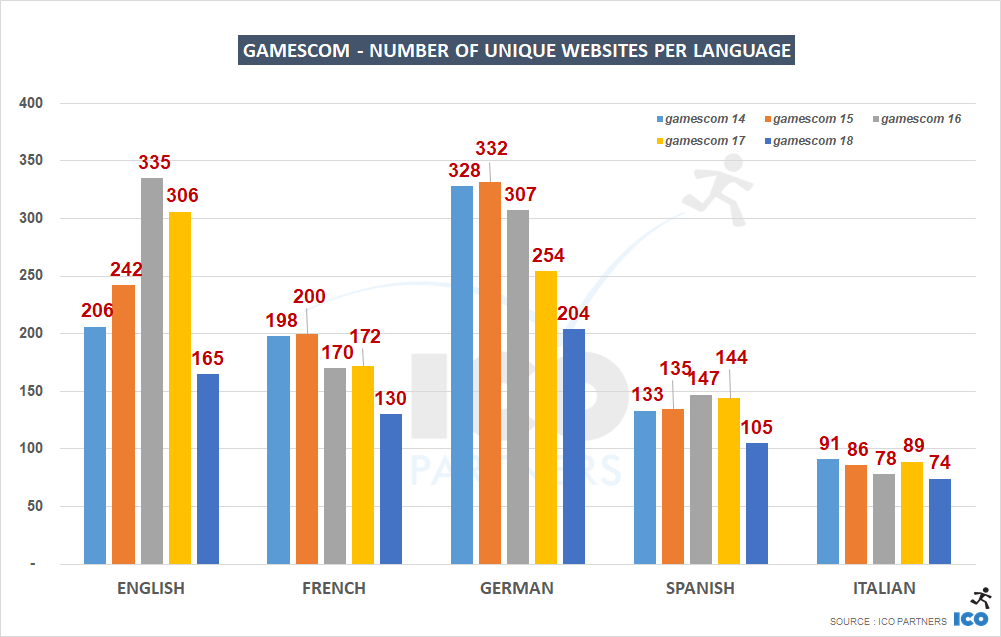 The most impressive take away from the numbers, when broken down per language, is the massive drop of English media mentioning gamescom. I can easily see why: without a distinct headliner to encourage English-language (especially US) media to attend, outlets have been keener this year to save on their budgets and limit their presence at a European show, in comparison with mainland Europe media numbers (although these also indicate a slower year, compared to 2017’s gamescom). 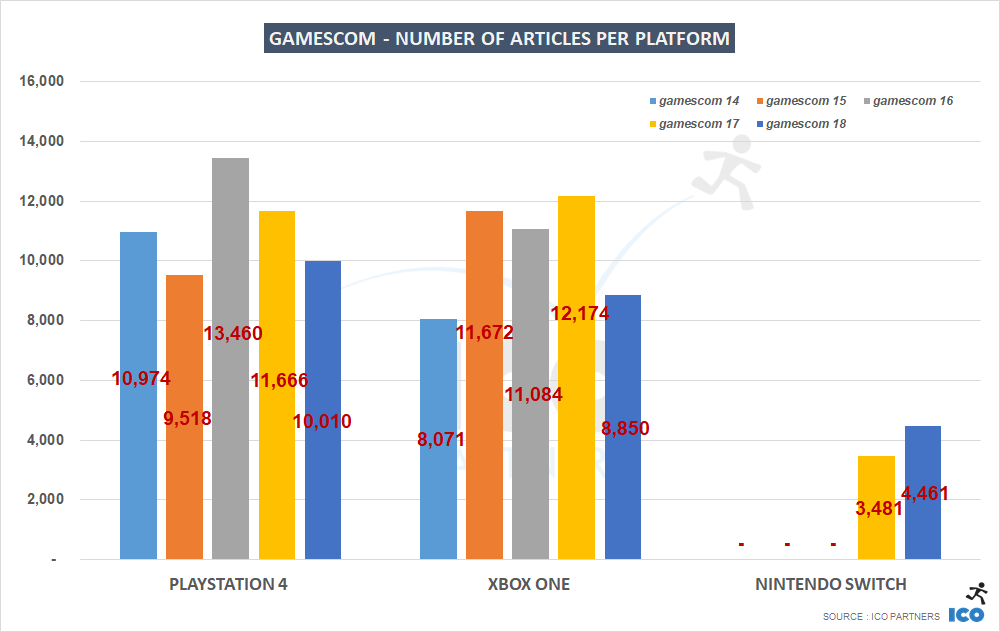 Both PlayStation and Xbox saw a drop in the number of articles mentioning them during the week of gamescom compared to last year, even though that drop is not as significant as the one in the number of articles mentioning gamescom. The absence of an Xbox conference compared to the previous year means that Xbox’s coverage dropped below PlayStation’s in 2018.

The Nintendo Switch is the one platform actually improving its year-on-year coverage numbers. It is very much the console that has a lot of the media’s attention right now. It also helped that Nintendo broadcast a Nindies Showcase on the Monday. It is still playing catch-up in terms of volume of articles compared to its two competitors, being at half of where the Xbox One is. 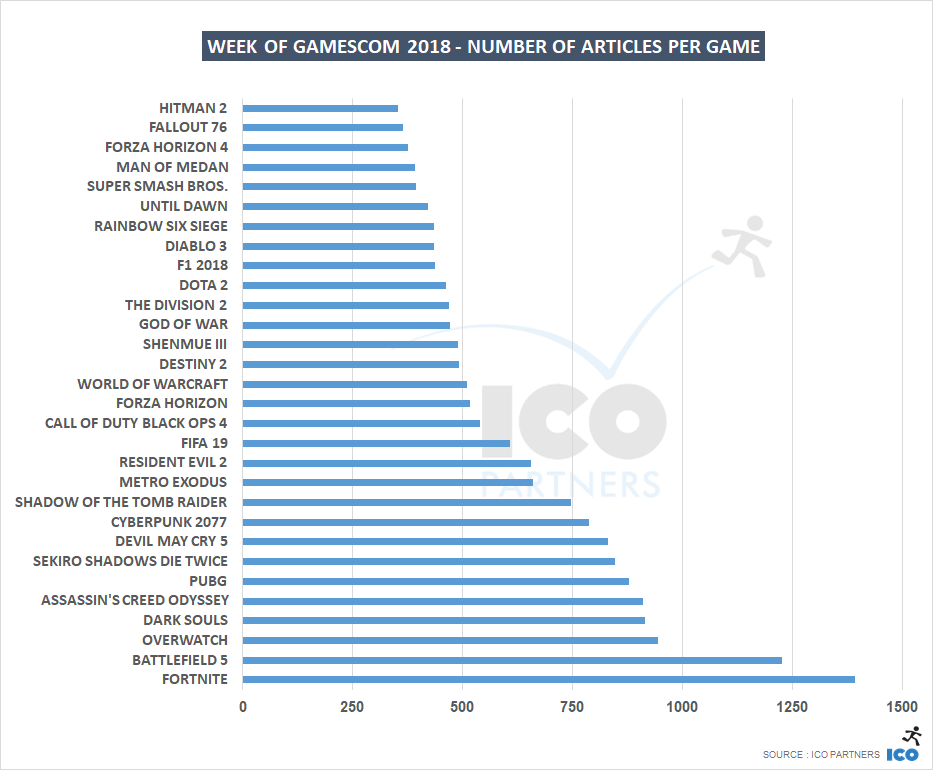 Looking at last year’s main games is quite revealing.

Of the games featured during gamescom 2018’s opening ceremony/press event, only Shenmue 3 (announcing the release date) and Man of Medan (game revealed) are in the top 30.

In 2018, gamescom turned 10 years old. On the attendance front, it broke all its records (well, most of them). However, there is something to be said about the media coverage, which seems to have been at it lowest since we’ve been tracking the data.

And while our methodology might be a factor here (the same way it might explain part of the numbers of the last E3), the absence of strong press beats for new games is also very important. At ICO Media, the team has been working on projects present at gamescom for several years, and there is anecdotal evidence that media shied away from this year’s gamescom, if not entirely, at least shortening the number days where they attended.

If gamescom is to keep its status as the second-most prominent event for the game industry from a media point of view (and even this year’s sub-par performance doesn’t challenge this), it will need to find a way to get a few more major announcements back, to make it a must-attend for journalists.

Last Minute Bonus Section – But what about VR?

Sam Watts from make[Real] asked me about the media coverage of VR during gamescom, literally as I was wrapping this up – his timing was so impeccable that I did a very quick check on both Oculus, the HTC Vive, and  PlayStation VR, and the volume of articles mentioning them during the week of gamescom.

Unsurprisingly, the hype around VR, at least at this type of very consumer-focused game events, seems to have moved on.